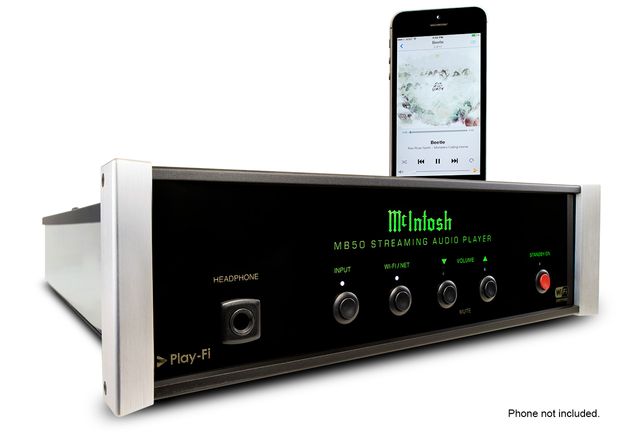 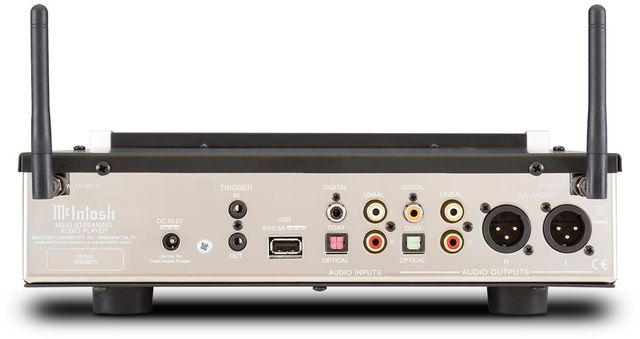 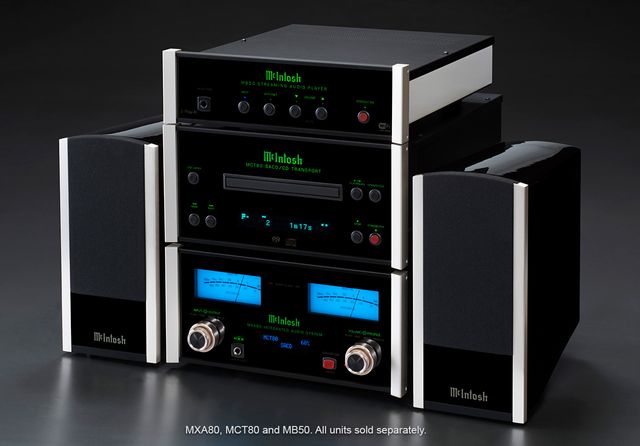 The MB50 features DTS Play-Fi® technology to give you the freedom and flexibility to wirelessly play your music at home anyway you want over your existing Wi-Fi network. While utilizing DTS Play-Fi streaming capabilities, the MB50 delivers the legendary McIntosh sound quality and performance found in our other home audio products.
Request a Quote
$99,999.00Save $NaN

Transform your home audio system into a wireless audio system with the MB50 Streaming Audio Player. The MB50 features DTS Play-Fi® technology to give you the freedom and flexibility to wirelessly play your music at home anyway you want over your existing Wi-Fi network. While utilizing DTS Play-Fi streaming capabilities, the MB50 delivers the legendary McIntosh sound quality and performance found in our other home audio products. All music handling is done to McIntosh’s exacting standards that are not found in any other Play-Fi device (except our RS100 Wireless Loudspeaker).

To set your music free, simply connect an MB50 to your audio system and Wi-Fi network, download the Apple or Android mobile app or Windows desktop app and then you're ready to stream. Besides accessing your personal music library, the apps have built-in support for many leading online streaming services1 including Amazon Prime Music, Deezer, KKBox, Pandora®, QQMusic, Rhapsody®, SiriusXM®, Songza, Spotify® and TIDAL (subject to change), letting you enjoy your streaming music on any speakers in any room in your house.

Have more than one audio system in your house you’d like to stream to No problem, just add an MB50 to each and then you can stream the same music to all systems. Or if you have multiple mobile devices with the app, you can simultaneously stream different music to each system. The MB50 with DTS Play-Fi wireless streaming puts the power of choice in your hands by removing all barriers between your music, your devices and your speakers.

Analog outputs for both balanced and unbalanced cables connect the MB50 to your system's amplifier or preamplifier; digital outputs are also included. An analog plus two digital inputs let you connect audio source components such as CD players or turntables (with appropriate phono preamplifier) to the MB50, allowing it to act as a mini-preamp. With source components connected, the MB50 can stream their audio to other Play-Fi devices on your network (such as the RS100) via Line-In Streaming; this allows music stored on physical media and previously limited to playback in just one room in your house to now be accessible in any room.

A big advantage of DTS Play-Fi compared to many other streaming options is that with its Critical Listening mode, native playback of up to 24-bit/192kHz high-resolution files is available with no down-sampling as of January 2017 (update your Play-Fi app to the latest version to utilize this feature). Many common audio formats are compatible with the MB50, including .mp3, .m4a, .flac and .wav files; DLNA is supported. Two Wi-Fi antennas help ensure a strong network connection for smooth playback; the MB50 can be hardwired to your network via a USB-to-Ethernet adapter (not included).